The exponential growth of online document archives has been a massive boon to historical researchers such as myself, but it also has its hazards. It’s like a long, mysterious tunnel with loads of enticing side chambers and sparkling grottoes; a tunnel which keeps extending even as you’re walking down it. So, the problem is that whilst I might start off focused on William Friese-Greene, it’s easy for me to stray way off the main path then suddenly look up from my computer screen, realise it’s 2031 and the world is now run by robotic squirrels.

And that’s exactly how today’s discovery came about. As time has gone on, my work on Friese-Greene has broadened out to interconnect with various other early cinema pioneers, in particular Birt Acres. If you want to know a little more about their connection, please take a look at my talk “Whatever Happened at Clovelly Cottage?” about the first piece of 35mm film ever shot in Britain. Acres was also the first person to project film in public in Britain, after the acrimonious breakdown of his partnership with Robert Paul. It was whilst digging around about Birt Acres that I came across something that made me stop in my tracks.

One of the Wonders of Online Research is the British Newspaper Archive – a gigantic project by the British Library to digitise both national and local publications. And so it was that I found myself unexpectedly staring at the pages of the Tower Hamlets Independent and East End Local Advertiser for Saturday 29th of August 1896. The subject was the East London Exhibition, a celebration of culture and industry that had proved successful beyond all expectations and was being extended for two months.

Held in the Mile End Road in what had been christened “The People’s Palace” (now rebuilt as the Queen’s Building of the University of London), a major attraction had been the performances that took place in Queen’s Hall. Birt Acres’ films on his “Kineopticon” projector were the star attraction and had been held over too.

The list of his films being shown was familiar enough, but then one new item jumped right out of the page at me. This is what it said about it:

“A novel feature is the utilization of the wonderful instrument for advertising purposes, and we believe that Mesrs. Bryant and May are the first firm that has realised the utility of the invention for this purpose. An additional view [film] has been shewn during the week in which a man is seen writing the legend “Bryant and May’s matches are the best.” on a blackboard, and then coolly turns round, strikes a match and lights his pipe, the smoke rising in the most realistic manner.”

Now, that may not make Charles Saatchi quake in his designer bootees, but this is August 1896, just 5 months since paying film shows began and here we are with the very first example of an advertising film: a commercial for a leading brand of matches. I was aware of some pretty early film advertising but I had never heard whisper of this. However, when I “discover” something, the first thing I do is check that one of the experts hasn’t been here before. This is what I could find:

The legendary chronicler of the beginnings of British film, John Barnes, had found one 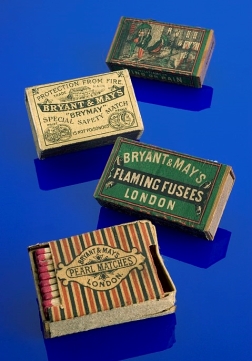 reference in a stock list to a possible Bryant and May film by Birt Acres. No details. Another writer said that Bryant and May had sponsorship advertising on the programme for the Kineopticon at the Queen’s Hall. Also, after Birt Acres split from Robert Paul, he signed a contract to make films and equipment for the major German chocolate company Stollwerck who also specialised in creating coin operated machines, for dispensing their candy and for entertainment. Both the Stollwerck Brothers and Bryant & May were founders and shareholders of the London and Provincial Automatic Machine Company. Curiouser and curiouser.

(So now I’m in a narrow passage from a side chamber and am not even sure I can find my way back to the tunnel.)

But the question for the modern researcher is: Is this clickbait quality stuff? Am I entitled to write a snappy headline with the word EVER!!! in shouty caps? Scouring the internet and my bookshelf didn’t thrown out a splinter to pop my balloon, so I was starting to feel pretty cocky that this may never have been written about before. But to be sure, I needed consider who the other contenders are for “First Commercial EVER!!!”. Let’s put them on the scales of film history.

Campaign, the leading magazine for the advertising industry, crowns Edison as The First (as do many others) for his groundbreaking foray into the world of sell sell sell for… Admiral Cigarettes! In it, guys smoke cigarettes – John Bull, Uncle Sam, some other bloke and yet another who, in an early homage to Justin Trudeau, is got up as a Native American – a woman bursts out of box, dressed as an admiral in tights, smokes fags (if you’re from the US you may need to research that phrase), chucks fags around, fags rain down, they unfurl a banner declaring WE ALL SMOKE, they all smoke, everyone’s happy. Brilliant.

The other well-known advertising film from this early period is Dewar’s It’s Scotch. That’s right: the first things that jumped into companies’ minds to push down our throats – quite literally – were cigarettes and alcohol.

But when did this happen? Admiral Cigarette was shot in July 1897, a year after Bryant & May Matches, so Edison is patently a LOSER and almost certainly responsible for all lung cancer in the ensuing 122 years. Who’s next?

The other big name at the start of moving pictures had to be in the frame. Their offering is decidedly more low-key, sneaky even. The film in question is “Laveuses” [“Washerwomen”]. Three women do the washing outside a Swiss house, cute children are shoved into shot to assist (one of whom appears to exit crying), the washing is hung up. That’s it. It all has quite an amateur feel – except for one thing. Prominently in shot are two boxes of soap, one of which says “Sunlight Seife” and the other one “Sunlight Savon”. In other words, the name for Lever Brothers’ best-selling product in German and French: perfect for Swiss audiences.

This was the idea of Swiss businessman and photographer François Henri Lavanchy-Clarke who was the representative of Lever Brothers (now Unilever) in Switzerland, but who also had the commission for Lumière films in that territory. So maybe it’s not so much the first advertisement as the first example of product placement. Lavanchy-Clarke himself strays into frame at one point, shoving an uncooperative tot into shot, towards other family members.

It was first shown in France in the Lumières’ home city of Lyon on 20th September 1896, so HA! Birt Acres beat them to it by a month. Actually, I cannot tell a historical lie: that’s not strictly true.

Its first public showing was a long way from Switzerland or France. To be precise, it was screened at Keith’s Union Square Theatre in New York as part of the bill for the American debut of the Lumière Cinématographe on 29th June 1896. But did that constitute advertising?

The promotional aspect was clearly not aimed at an American audience, who were unlikely to understand the foreign words or know the brand name, so that part would have no significance.  Lever Brothers had opened a small office in New York, but were not yet manufacturing Stateside so promotion had no value. Indeed, the change of title for the USA to “Washing Day in Switzerland” shifted the emphasis onto it being an exotic foreign scene (to that audience, anyway).

AND THE WINNER IS…

Edison is Nowheresville and, as I said, Laveuses can more accurately be described as a film with product placement that still works fine for those who don’t pick up on it. It is quite different in nature to Admiral Cigarette, Dewar’s It’s Scotch or Bryant & May Matches, all of which are entirely about the product and designed to focus maximum attention on the brand, with the explicit aim of urging the viewer to consume it.

So, with that in mind, I’m going to declare Birt Acres’ Bryant & May Matches THE FIRST COMMERCIAL EVER!!! (Until someone proves me wrong.) Not only that, but he appears to have had a good year’s jump on the rest of the world. And if I’ve upset any Lumière lovers, we can all agree that Bryant & May Matches was the first advertising film shown in Europe. No need for a public vote on that.

Sad part is, that whilst we have the other two contenders in their complete form, not a single frame is currently to be found from the Birt Acres film. There are two reasons for that. Edison and Lumière were corporations with interests in preserving, protecting and exploiting their products. What Birt Acres had was basically a cottage industry. But the loss of this film and so many other ones from that early period is also because it took us so long to see there was any value in preserving them and expending the time, money and effort to do so. If you think this is me being stroppy in a similar manner to my recent article in the Guardian, you’d be right.

But somebody has to stand up for Birt Acres and see he gets clickbait credit where it’s due.

BACK TO THE TUNNEL

Here’s the kicker: remember that Lavanchy-Clarke guy? Turns out, he was also a business partner of Ludwig Stollwerck, and earlier in 1896 he was deciding between backing Birt Acres or the Lumières for launching moving pictures in Switzerland. The Lumières got to him first and the rest is (this) history. Are you getting chills thinking about that? No? That must be because you’re a normal person with a proper life who doesn’t live down here…

Now, if I take a right turn I’m finally back in the main tunnel again. That’s a relief. So, what year is it up there? And what are those burrowing sounds?

More of this kind of thing